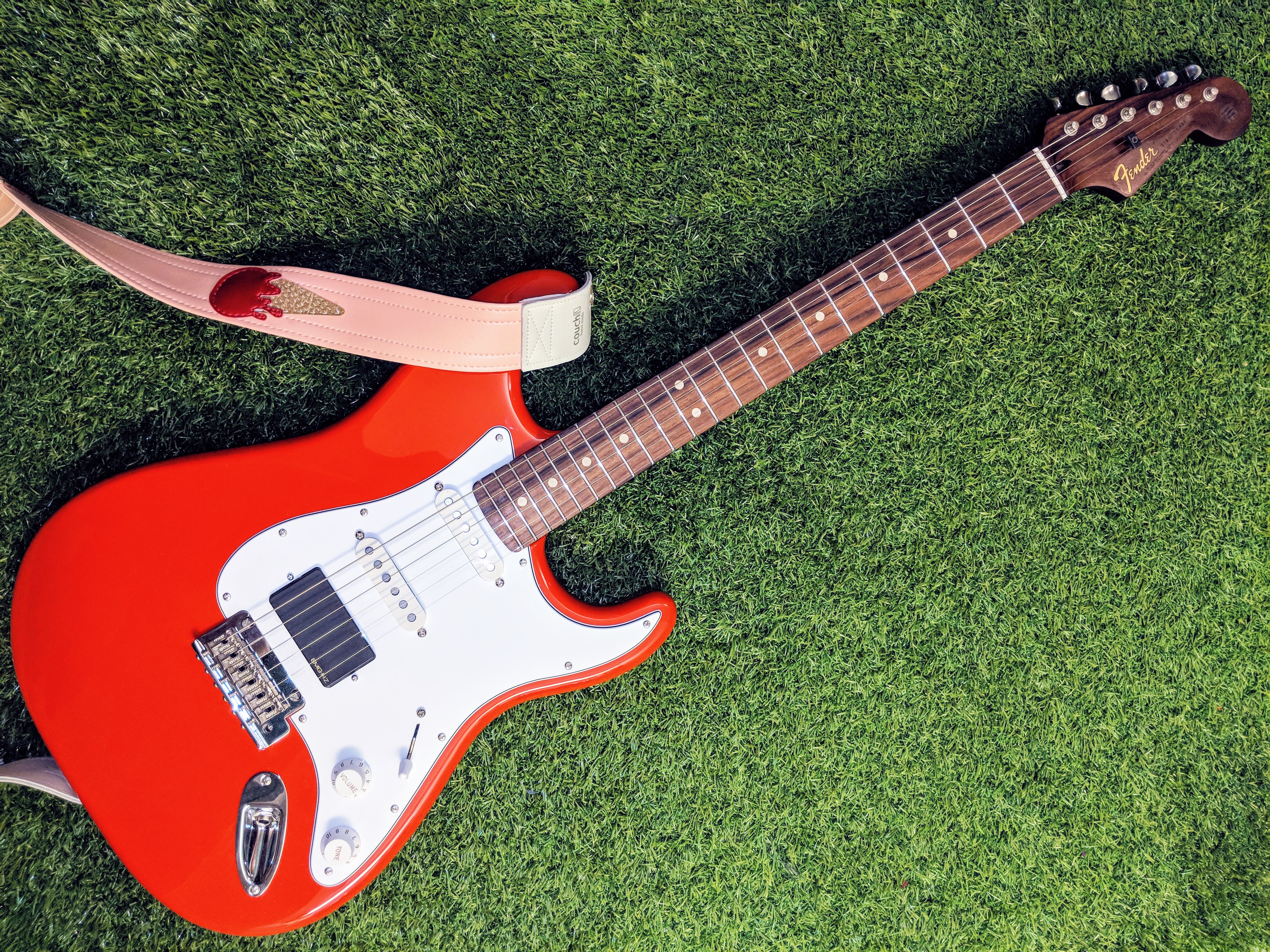 Most guitarists are pretty habitual – we might have different guitars, but they tend to be the same “kind” of guitar.

I’m a Stratocaster “person” – while I might “want” all sort of guitars, the guitars I end up “needing” tend to be Strats. I like the prototypical sparkly tone that its single-coil pickups produce, and the “quacky” sounds from the in-between pickup positions (i.e., using the neck and the middle pickups together, or the middle and the bridge pickups). I like how the neck is bolt-on, so if I ever have to ship a guitar, I can just disassemble the entire guitar. Most of all, I like its rounded edges, and how it looks like a rocket ship – in contrast, I think the Telecaster looks like a cheese board.

However, there are a few things about the Stratocaster that annoy me (and I’m sure, other guitarists). Thus, I’ve built this guitar, that address most (if not all) of these foibles.

First, the bridge pickup on most Strats sound like someone taking an ice pick to your ear. The lower output from a single-coil (vs. a humbucker) and the position of the pickup combine to result in an extremely bright, “trebly” sound. Nowadays, it’s not uncommon for Strats to come in a HSS (humbucker, single-coil, single-coil) configuration, with the bridge pickup being replaced by a fatter sounding humbucker. However, the ones on the market tend to use uncovered humbuckers (with the magnetic pole pieces exposed), which, in my opinion, look messy. Thus, I opted to put in an EMG H4 in this guitar, which stands out with its blacked-out cover.

Secondly, the bridge on vintage Stratocasters are of a classic, but obsolete design. These have six screws bolting the front of the bridge to the body directly while allowing the rear to float (for use of a “whammy” bar). However, the tuning stability of this design has always been questionable, to the point where many players such as myself opt to “deck” the bridge (tightening the balancing springs until the bridge lays flat and is immobile). For this guitar, I found the body of a new Fender Player Series Stratocaster, which uses a 2-point tremolo, on eBay.

Thirdly, a Stratocaster normally has three knobs: a master volume, and two tone knobs that traditionally adjusted how much treble bled through on the neck and middle pickups. However, I’ve never used them separately, and more importantly, having three knobs means that the one nearest to the bridge blocks my picking hand when I want to rest it there. Thus, the simple solution was to have just a master volume and master tone (controlling all three pickups), which leaves more space around the bridge.

Finally, the most important part of a guitar is probably its neck, as it’s the part that you’re in contact with the most. For this build, I used a one-piece pau ferro neck made by Warmoth. Besides having the benefit of not needing to be finished with oil or clear-coat, it also looks super cool because of its unconventionality; Strat necks tend to come in one of two flavors: all maple, or maple back with a rosewood fingerboard.

Some additional specifications for guitar nerds: