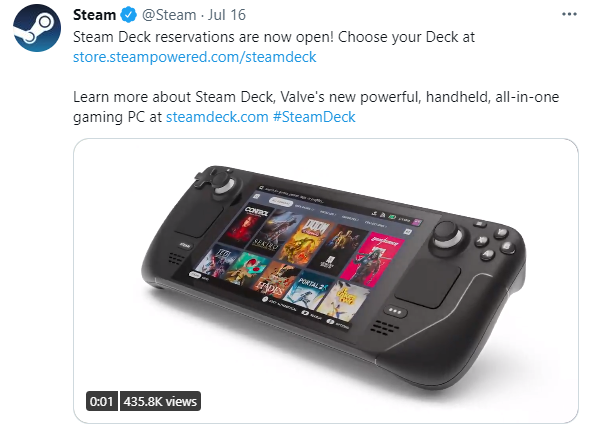 Yesterday (July 16th, 2021) my YouTube feed was abuzz with tech content creators fawning over Valve’s announcement of the Steam Deck, a handheld computer that would be able to play games straight off a user’s Steam library, and additionally, function as a traditional PC, able to run third party software and operating systems.

To be honest, I’m pretty hyped up about the Steam Deck as well, particularly because of that secondary use case. I remember being completely enamored by the tiny Samsung N310 netbook that struggled to run Windows XP that I carried to college, and in just over a decade, a device that’s half the weight and multitudes more powerful could be had for about the same price (less, if you factor in inflation).

That said, an interesting question that came up amidst the online discourse was: Why? After all, aside from a few forays into the hardware market with mixed results (e.g., Index/Steam Machine/Steam Controller), Valve, which started as a software company, seems content to serve its role as the custodian for the closest thing we have to a legal money-printing machine (Steam itself). Furthermore, the Steam Deck, which looks a little like a Nintendo Switch (and a lot like an old-school Sega Game Gear) doesn’t have the support of a game library that unconverted Switch users would be clamoring to play (e.g., family-friendly, casual games). So… why spend the time, money, and energy to develop this?

I obviously have no insight into how Valve operates internally; “Because it’s cool” is a perfectly justifiable reason to undertake an endeavour like this when your company is making money hand over fist, and to be honest, a reason that has fueled countless innovations throughout history. That said, the dynamics of this scenario reminded me of a product management interview question that I came across a while back: Why did Google get into the smartphone market?

To answer this question, we have to travel back in time to the 2010s, when the Nexus series of phones first launched. These were high-end flagship phones, which at first glance, seemed at odds with what Google’s strategy should have been. On one hand, Google, which was and is a company that primarily makes its money through its users’ data, should have been focused on driving down the price of Android devices as a whole, to get more phones to more users, rather than making devices that only the richest people in the world could afford. After all, the more people using Android, the more data Google gets. But – and this is easy to say with the benefit of hindsight – it’s possible that they believed that mass-market adoption of Android devices was a problem that the market would sort out on its own. After all, phone manufacturers are just as concerned with selling as many devices as possible, and given that Android was the only viable option for a cheap smartphone, perhaps it wasn’t that hard to predict the eventual proliferation of inexpensive Android smartphones in developing markets.

What wasn’t going to happen by itself, however, was the creation of a premium experience and accompanying ecosystem – the main reason why Apple is a trillion dollar company. And so, a possible predicted future was one where the cost of manufacturing devices like the iPhone would continue to drop, incomes in developing markets would continue to rise, until one day, a switch would flip and these people, in their newly developed markets would “graduate” from their Android phones straight into the welcoming hands of the Apple ecosystem. Meanwhile, in this dystopian future (from Google’s perspective at least), manufacturers would have no incentive to develop hardware for software that wouldn’t make use of it, while Google would have no incentive to develop software for hardware that couldn’t make use of it. Google’s role, then, to avert this timeline would be to create reference devices that signaled where they were going with their software, to push hardware manufacturers to adopt these new capabilities.

Only a handful of Google executives will know if any this is even remotely true, but one development that might signal the end of this plausible arc is the fact that the latest Pixel devices at the time of writing (the Pixel 4a with 5g, and the Pixel 5), for the first time, are lagging behind competing devices, hardware-wise. They are no longer the fastest phones, with the best cameras etc. Instead, they take advantage of Google’s software prowess to provide the best Android experience you can get – software that can sometimes even overcome hardware deficits (e.g., cameras that take advantage of proprietary image processing to produce market-leading image quality) – all for a relatively modest price. Could this be a sign that Google believes that they’ve pushed the hardware as far as it needs to go, and that the next step to (further) global domination is to get this software experience into the hands of the masses by undercutting everyone? Only time will tell.

But the reason I went on this huge tangent in the first place is because if I had to guess, Valve developed the Steam Deck to solve a similar chicken/egg problem. The chicken here is that you have these games on the Switch that are designed for the form factor, and pull in a specific audience that PC games don’t typically appeal to. The problem is that developers are not incentivized to develop those types of games for the PC because of how most PC gamers play (on a desktop PC, with a mouse and keyboard). Thus, they’re hatching the egg themselves, by creating a device that will pull in that PC-gaming audience, thus incentivizing developers to develop games that take advantage of the device’s form factor. Who knows if they’ll be successful? But I, for one, am very down to play a Mario Kart clone on my new Steam Deck in December.