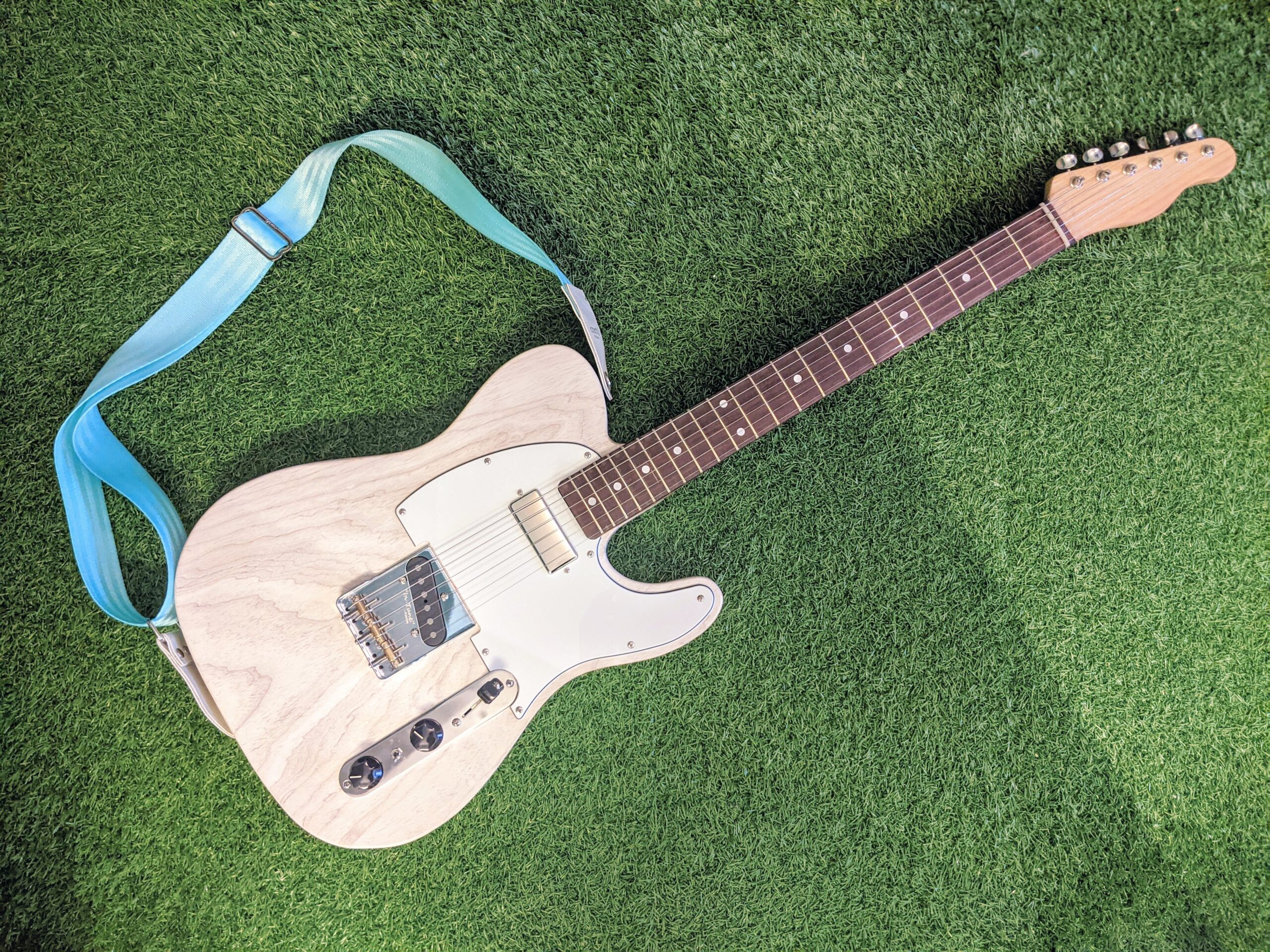 Ever since I started working on my own guitars, it’s been hard for me to buy a guitar off the shelf – not necessarily because I’m that great of a guitar technician, but mostly because I’ve been able to make guitars just the way I like them. A recent experience that exemplified that feeling was when I was sitting in a guitar store earlier this year, holding a $2,000 guitar, thinking to myself: “My guitar at home, that I put together from used parts, with Tegan and Sara stickers on the back and a tremolo cavity that I’d hacked away at with a file to make room for a slightly different-shaped replacement (a Gotoh 510, if anyone’s curious) sounds and plays better than this”.

About a month ago, I was browsing the inventories of various guitar part suppliers when something caught my eye. It was a Telecaster-style body, shaped from a single piece of ash, with a beautiful grain pattern, that weighed around 4lbs. Relative to other commonly used woods in guitar-building, ash tends have more variability in weight, and combined with the fact that guitars are usually made out of two or more pieces of wood glued into one, it’s rare to find these attributes together.

I thought back to a guitar that I’d been coveting for a while – Jimmy Page’s signature white-blonde Telecaster. Besides the fact that it cost $2,500, the reason I never bought it was because there were a few things about that guitar that I wish I were different, and it’d seemed like a terrible decision to pay that much for a guitar, only to then put in more time and money modifying it into something less valuable than if I had kept it in its original condition.

With that guitar in mind, I clicked “purchase”.

A few days later, it arrived, in a box full of shredded paper to protect it. After admiring the grain pattern up close for an inordinate amount of time, I set to work staining it with a white, alcohol-based pigment. A few coats later, I had come close to the shade of white I wanted and was afraid to apply more stain, for fear of washing out the grain pattern even further.

Over the next week or so, I applied a few coats of finishing oil a day, leaving at least a 4-hour drying time each coat. As it turned out, the oil finish lifted a bit of the stain, resulting in an unintended, but not unpleasant “white chocolate cake”-colored finish. A few days after I applied the last coat of oil, I buffed in a final coat of wax.

Acquiring and Refurbishing a Neck

The next step in this build was to find myself a neck with a rosewood fingerboard (like the one on the Jimmy Page Telecaster) that I would be able to work into playable shape, but that also wasn’t too expensive. I managed to find this old unbranded neck off Reverb for cheap.

However, it did have a number of issues.

Firstly, there was an old screw with a broken-off head embedded in the wood. The previous owner had drilled a hole right next to it, perhaps to try and extract the screw, but had apparently failed. I was able to remove the stuck screw by using my smallest drill bit to drill around the screw, making room for the pair of needle-nosed pliers which I used to grip and rotate the shank.

Secondly, the neck came with a headstock that was painted black. From the quality of the paint job, it was clear that this was not done at the factory (unless the factory happened to employ an amateur like me). I considered leaving it, but eventually, curiosity got the better of me (not to mention that the guitar I was trying to emulate did not have a black headstock). To my horror, the previous owner had inlaid their initials into the headstock. However, this also gave me the chance to learn how to make a headstock veneer (see below)

Thirdly, the frets that came with the neck were tiny – both skinny and short. These were common on guitars in the 50s and 60s, although you can sometimes still find them on contemporary guitars aimed at recreating instruments from that era. I ended up refretting the guitar with my favorite sized frets.

Fourthly, the plastic nut was completely worn out and would have had to be replaced anyway, even if I didn’t want to do a refret.

Finally, the edges of the neck were not rolled (i.e., the fingerboard and the side of the neck met at a 90-degree angle), making it uncomfortable to play. This was something I would address when I refretted the guitar.

After removing the stuck screw, the next thing I did was to make a veneer for the headstock. I pieced together the general concept in my head: (a) find some wood veneers, (b) cut it roughly to shape, (c) use steam (I used my kettle) to pre-bend the arched bit, (d) glue it to the headstock, making sure to use multiple clamps to get full coverage, (e) use a sharp knife to trim it to shape, (f) sand off the remaining edges to blend them in, (g) carefully re-drill the holes for the tuners, and (h) oil and wax the surface to protect it.

That said, this was straddling the territory of what was actually Google-able, so I had to fly by the seat of my pants for lots of the process.

After trying a few hardware stores in the city without luck, I turned to eBay and managed to find a set of wood veneers of various species of woods. I sorted them in order of how good I thought they would look, and did a dry run with an ash veneer. Ultimately, I chose to use a pine one, both because its reddish hues matched the color of the fretboard, but also as a secret homage to the early Telecasters in the 50s that were made of pine.

I chose to refret the guitar with Jescar EVO Gold FW47104 fret wire. This is a common gauge used on many modern guitars, and I like it because it’s not too tall or wide, but just large enough that my fingers barely brush the fretboard while playing, providing enough contact to feel “connected” to the instrument, without too much friction from fingertips rubbing against the fretboard.

I wish I had taken better “before” pictures, but I had done a couple of refrets before and didn’t think this time was particularly notable, and it’s also hard to get good process photos because the operation involves using a soldering iron to heat the frets while using a pair of pliers to slowly extract them. With two hands already involved in the process, it would have been hard to operate a camera.

It took me a few hours to (a) remove the old frets, (b) hammer in the new ones, (c) cut the fret ends, (d) file down the remaining stubs till they met the neck, (e) file and shape the ends of the frets, (f) crown and level the frets using sandpaper, a sanding block, and a crowning file, (g) roll the edge of the fretboard and smooth out the fret ends, (h) polish the frets using sandpaper and micromesh.

After refreting the guitar, I had to replace the nut, as the new, taller frets sat higher than the nut (thus, none of the strings would have been able to ring when the guitar was played “open” – when no frets are pressed).

First, I had to remove the old plastic one. There are many ways to do this, but one which I had successfully used in the past was to use a hammer and wooden block to gently tap the base of the nut, causing it to pop out of the slot. However, this time, mishap struck, and after the gentlest of taps, the top of the fretboard, together with the plastic nut, disintegrated and broke off! Thankfully, the break was clean, and with my newfound wood-gluing experience from making the veneer, I was able to repair this fairly easily. If you look carefully at the “after” photo, you might be able to spot a couple of lines from where the break happened. And if you can’t spot them, I guess I did a good job!

Next, using sandpaper and a set of nut files, I shaped a new nut made of unbleached cow bone that I had ordered online. To save some effort, I bought one that was close to the width and breadth of the nut slot, and that had pilot grooves cut into the top to guide where the strings would go.

Lots of filing, sanding, and polishing later, I ended up with a result I was pleased with. I did end up cutting the nut slots as low as possible, so they might have to be filled with bone dust and re-cut in the future, but that’s not too difficult to do.

One of the changes I wanted to make to the original Jimmy Page guitar was the pickup configuration. I wanted something a little more versatile, and I loved the pickups on the Music Man St. Vincent signature guitar I used to own, so I decided to replace the traditional Telecaster neck pickup with a mini-humbucker. I also wanted to be able to split the humbucker with a toggle switch, to produce something similar to a single-coil tone. After some experimenting, I wired a 2.2K ohm resistor to the switch, which results in a “partial” coil split, and thicker tone when the coils are split.

After a couple of weeks work, I assembled everything and set up the guitar, which included a couple of finishing touches: Knobs from a Jazz Bass, oversized strap buttons, and a Gotoh bridge with cut-off sides.

In case you wanted to hear what it sounds like:

A guitar part I wrote for Alessia Cara’s “Sweet Dreams”