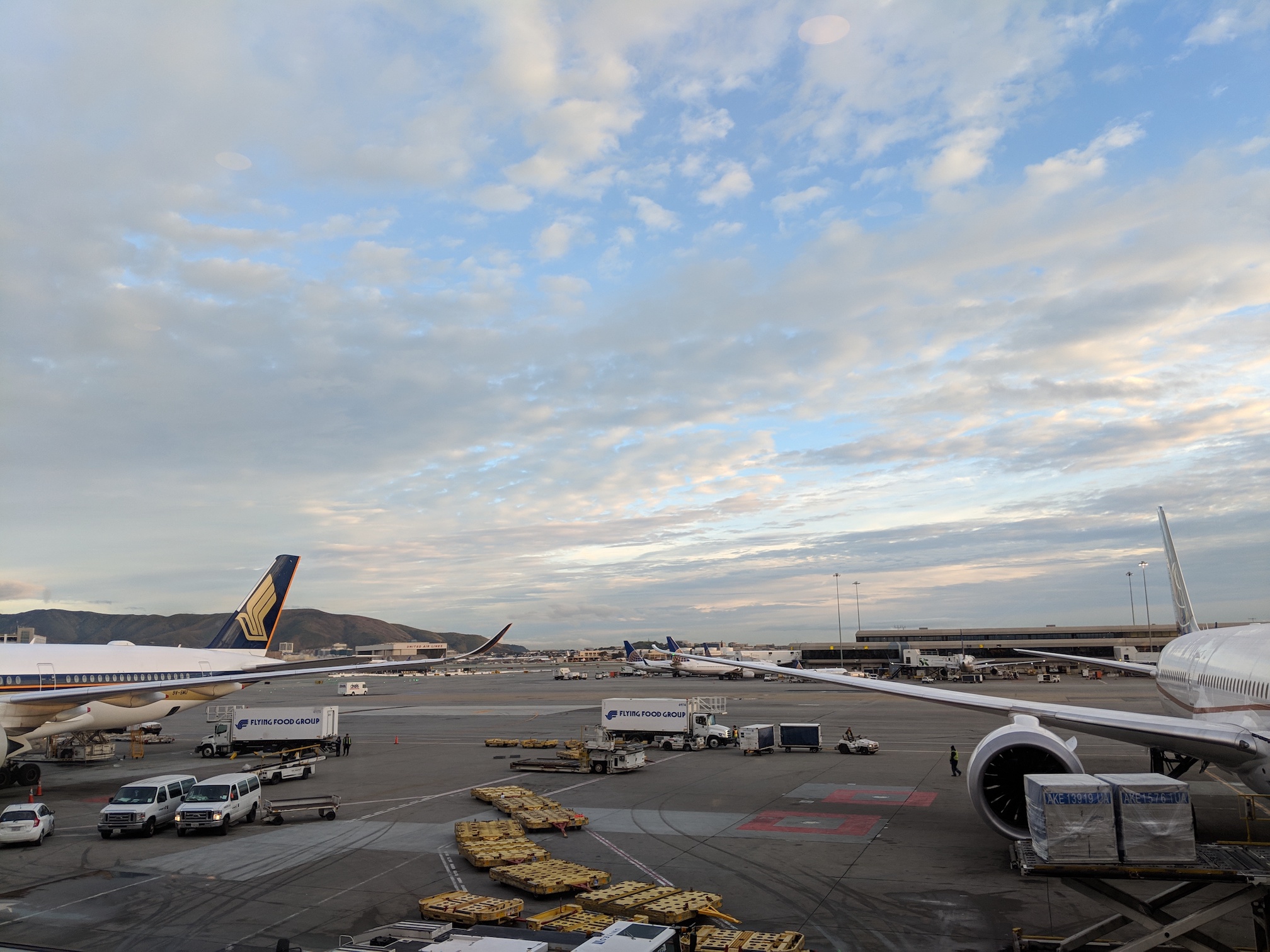 I love flying. Up in the sky, I’m unfazed by the arid cabin air, the ever shrinking seats, and the occasional crying baby. I love the mushy food wrapped in packaging designed more for the logistics company transporting it than the person eating it. On longer flights, I love drifting in and out to of sleep to movies I’ve seen dozens of times; on shorter ones, I entertain myself by re-reading the safety card repeatedly throughout the flight, or leafing through the in-flight literature, letting the offer of a timeshare vacation home waft by me just once more.

I think part of why I love flying has to do with the association I’ve had with it since I was a child. Growing up on the tiny island of Singapore, there were no domestic flights. The airport was a gateway to a new and different land, one that I’d likely never visited before. Nothing – not the glassy architecture of the building nor the demeanor of the passengers, arriving or departing – had the commuter-like quality that I’m now more familiar with, living in the US.

I also love flying simply because it’s possible. For thousands of years, human beings were limited to the speed of a horse. The only way you could travel faster was to jump off a cliff, and that journey tended to be one-way. Then, in the 1880s, you could commute as fast as the first motorcar, and at the dawn of the 1900s, early developments in powered flight would let you traverse “as the crow flies” for the first time. In 1947, the Bell X-1 finally let us match a speeding bullet, and in 1952, the first commercial jet airliner, the de Havilland Comet, entered service, letting the masses participate the entirely man-made cycle of extracting the remains of creatures long dead from the depths of the earth, and blazing them incandescent in the skies.

But, as I’ve grown older and started to question what’s meaningful in my life, I realize that there is another, perhaps more macabre reason why I love flying.

The journey into adulthood and, subsequently, old age, is filled increasingly with questions that nobody has answers to. It starts out with the fairly innocent “How do I make friends, now that I’m out of school?”, and ends, I can only guess, with “Was I worth it?”

On a daily basis, I grapple with what it means to live a meaningful life. Not necessarily a pleasurable one – that’s fairly straightforward. Depending on the time you anticipate having left on earth, it might involve a few million dollars in the bank, or some hookers and blow, but the gist of it is that most of us are pretty good at knowing when we’re feeling good in the moment, and it’s not too complicated to figure out how to sustain that.

I’m also not too concerned with living a life that seems meaningful to others. Wander around in the zeitgeist enough and the words of famous authors and Instagram influencers start to meld together into a meaningless existential soup of platitudes. Depending on who you ask, life’s about making an impact, or a loving family (I guess you’re out of luck if you’re an orphan), or raising kids you can be proud of (sorry if you’re infertile), or having hundreds or perhaps thousands of people attend your funeral (better hope there isn’t a pandemic when you kick the bucket). A meaningful life might be something you can look back on while lying on your deathbed, or maybe that doesn’t matter because all of us could die at any time, or because all of us are dying all the time.

Ultimately, perhaps the fairest thing to say is that despite everything floating in the cultural space around us, meaning in life is something everyone has to square with on their own. Which means all of us, at some point, are going to need to find a feeling, deep in our gut, brain, or heart, idiosyncratic to us,  that tells us “Yeah, that seems about right.”

Which brings me back to why I love flying.

As much as I revel in the miracle of human engineering that is human flight, I wonder if I’m actually, secretly, a nervous flyer. I say this because I realized on a flight once, that the internal voice that’s supposed to soothe me while the plane is barreling through turbulence isn’t that soothing. Presumably, I’m supposed to realize how vanishingly unlikely turbulence is at causing a plane to crash, referencing the statistics on the frequency and causes of plane crashes, or perhaps my limited knowledge of aviation engineering, garnered from hundreds of YouTube videos.

Those thoughts do cross my mind. However, while the plane is seemingly plummeting from the sky, albeit only intermittently, the overwhelming sensation I get is one of finality. In those moments, my mind goes to the worst possible outcome and announces: “Well, this could be it.”

I’ve been lucky. Over the past ten years or so, most of the time my response has been “Okay, I’m ready.” But that journey has been far from straightforward. Although there have been times in my life where I would have been totally at peace if we fell out of the sky like several hundred tons of metal ought to do, other times, I’ve felt a nagging sense that life wasn’t quite going the way I wanted it to. And in those fleeting moments, there is clarity: All that is external and out of my control falls away, and I am left staring into my own soul; a reckoning with myself. The things I can change float to the surface, and whatever is beyond me dissolves into the ether. It’s not perfect – those judgments are my own, and at my funeral, everyone else will have an opinion on what I could have and should have done. But life isn’t perfect – in the end, the only thing you can do is step off the plane, walk out of the airport, and start to make things better. Maybe that’s why I love flying – it takes me somewhere else.